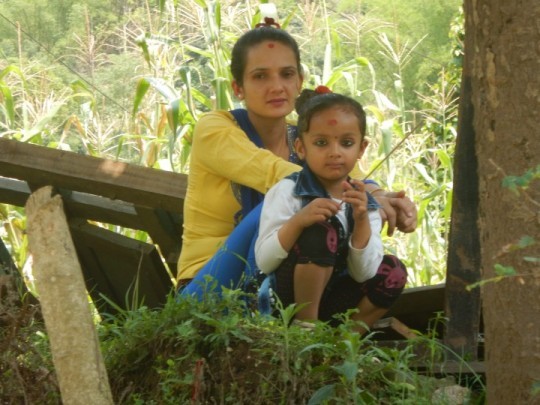 Being Present in Earthquake Damaged Nepal

I had to extend my visa here in Nepal the other day. It has been almost 90 days since I landed in Kathmandu for my Everest Expedition. Much has happened since then.

I have traveled to earthquake-damaged areas. I have visited Pokhara and trekked in Margi Himal in the Annapurna region, which has not been affected much by the earthquakes. I have talked to friends and strangers. Everything I have done has been done in an attempt to get an overview of the situation in this country.

In the coming weeks, I will have a lot to tell you about my stay here after the earthquake on April the 25th.

Four weeks ago, from May 21st to 23rd, I journeyed to Dhading… My, how the time flies!

My business partner for the treks that I am organizing in Nepal is from a village in Dhading. Dhading is 1 of 75 districts in Nepal and 1 of 14 that has been heavily affected from the earthquakes, as it is close to the epicenter of the quake that happened on April 25th. There have been probably over 100 aftershocks and tremors in this area since then.

It takes 4 hours by bus from Kathmandu to reach Dhading Besi, which is the district capital. I started to get an idea of the extent of the damages on the bus ride into Dhading Besi, where I met my guide and good friend Babu. Since Babu is from Dhading and has also been organizing many treks in the area was it natural for me to have him with me on this trip. 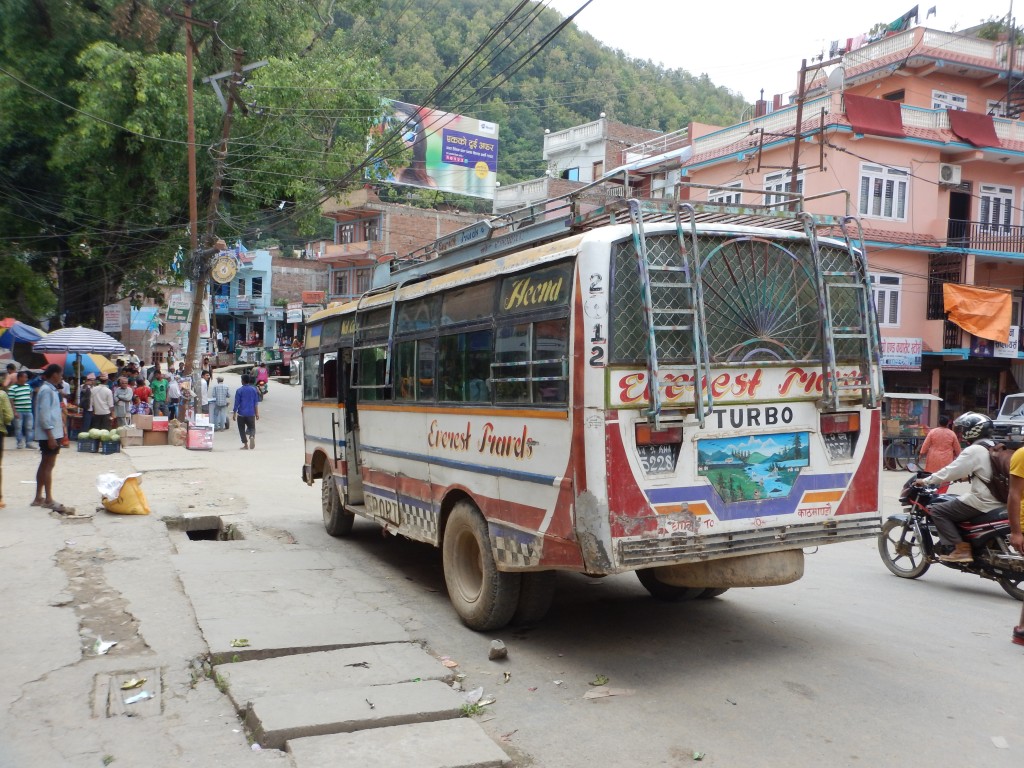 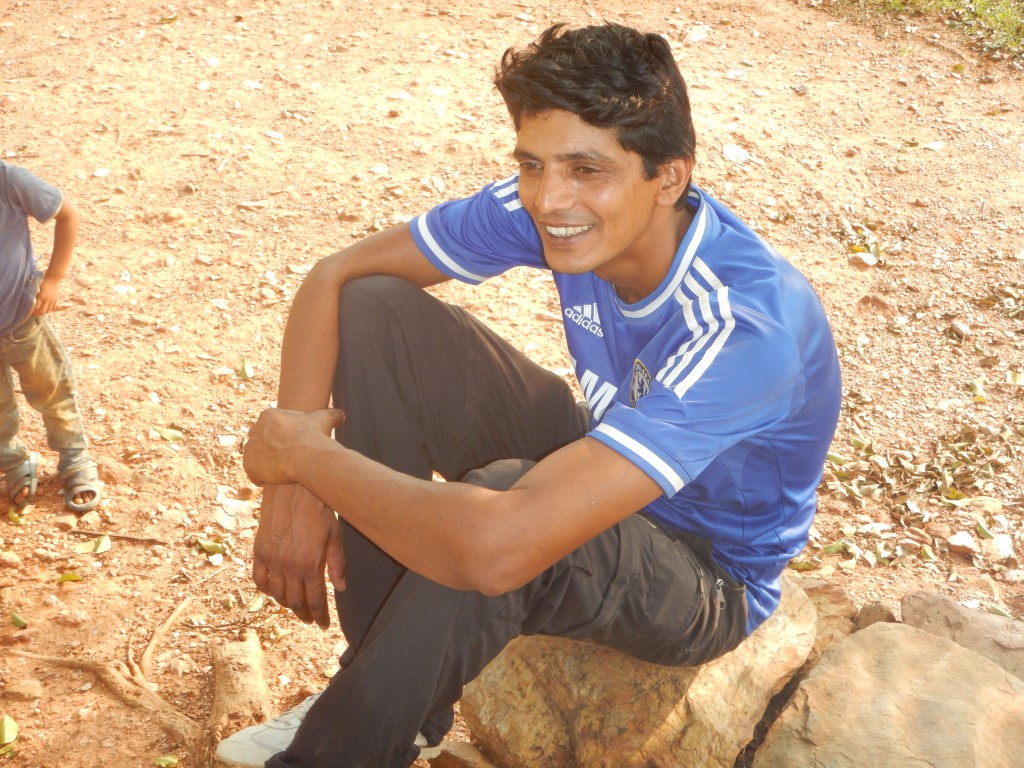 One of the reasons that I went to Dhading was to have a look at potential rebuilding projects that C.J. and myself can dedicate our fundraising to. Babu and I continued on the bus from Dhading Besi for 2.5 hours to visit Chandeshowri Lower Secondary School. We arrived at the school in the afternoon; I traveled the whole day to get there. With a quick overview of the premises, we concluded that the whole school, more or less, must be rebuilt. It was heartbreaking to see the school and to think about the school children that had not been going to the school during the past month. 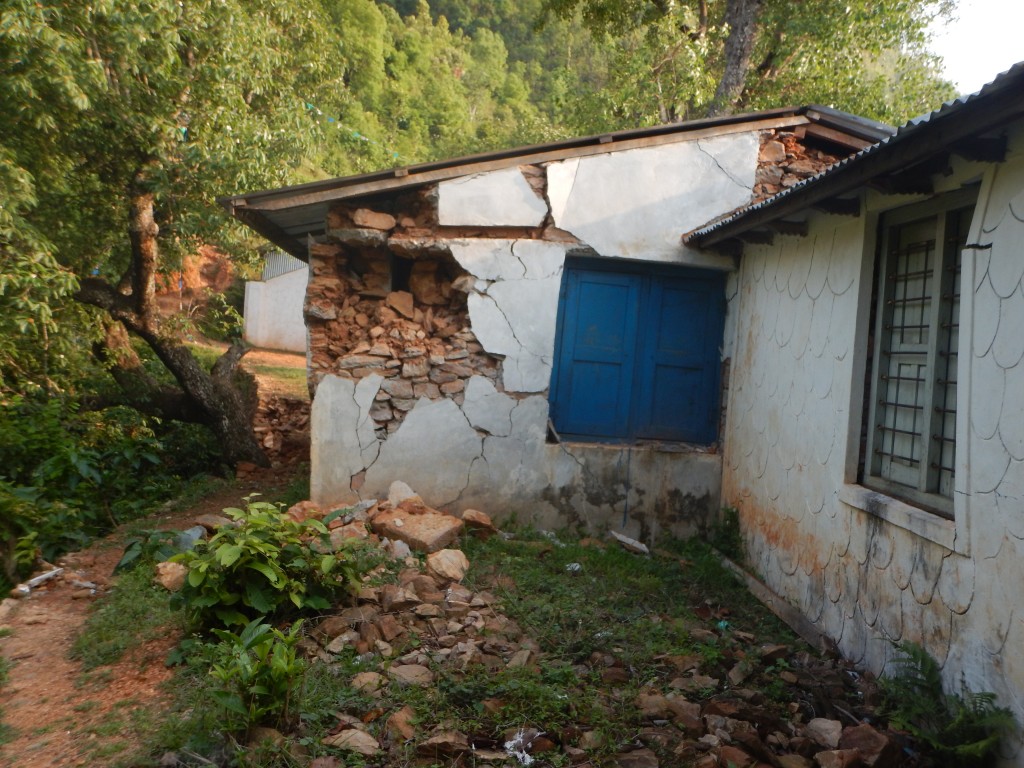 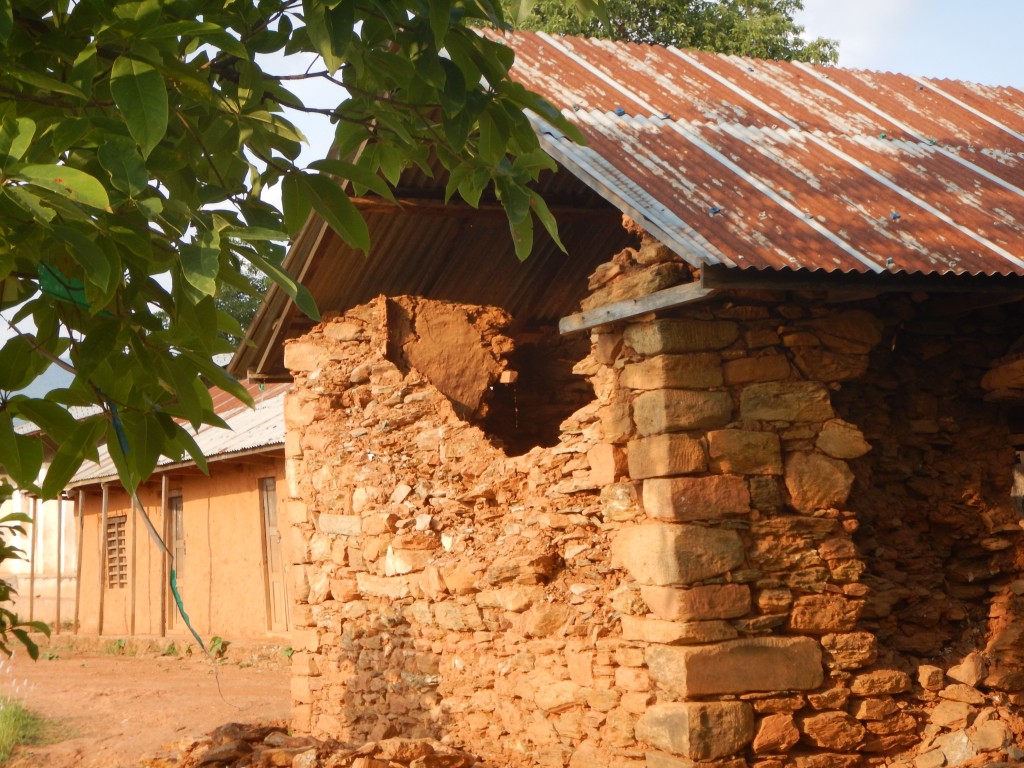 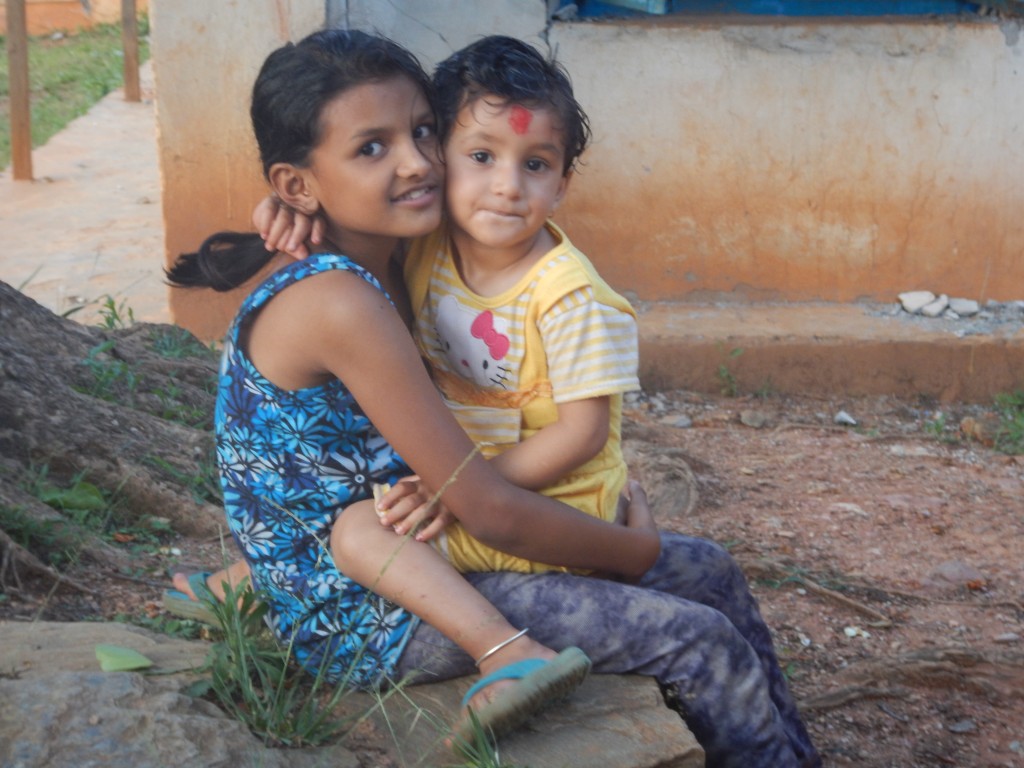 We continued to a village close by named Tari Bensi on the main road from Kathmandu to Gorkha and Dhading, where we stayed overnight in a guesthouse. With its small cafés and guesthouses, the village was a meeting place for truck drivers that were distributing relief material into the area. It was a busy place with convoys with trucks passing through the village continuously. It almost felt unreal to sit there and watch all the trucks passing by with supplies. It became very clear for me at this point how extensive the disaster that had hit Nepal was. 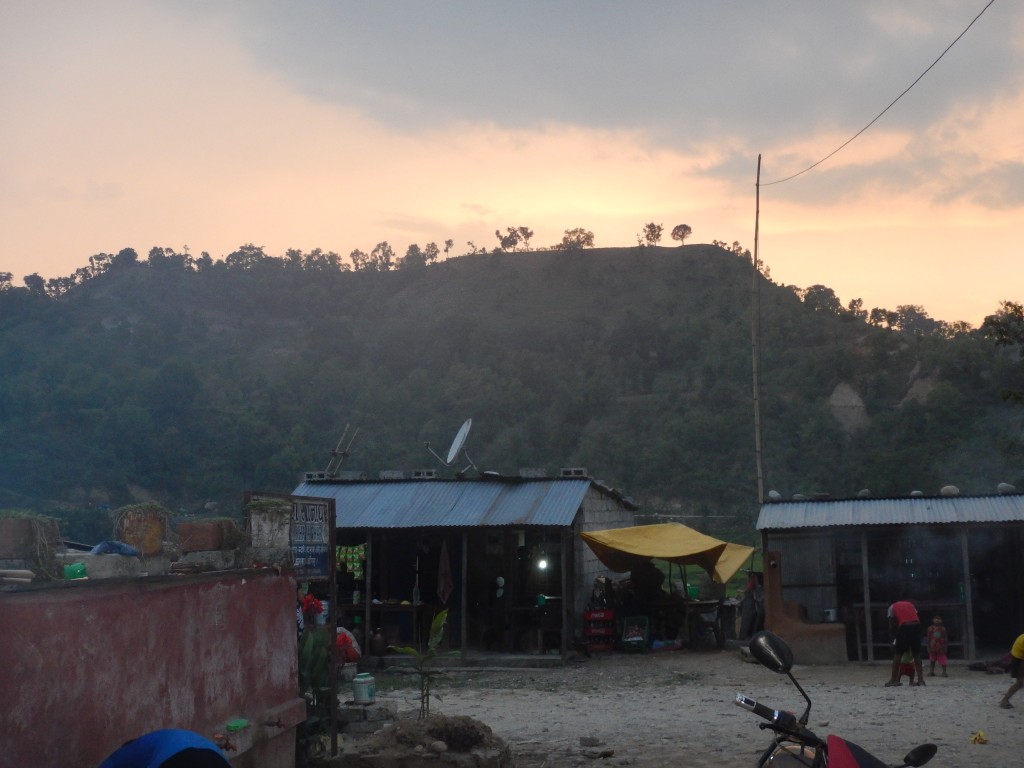 We continued the next day on the road up the valley to the village of Jyamrung, where my business partner on the treks, Ram, is from. We walked the whole day in between broken houses and villagers that were building temporary housing in preparation for the coming monsoon season. Almost all of the houses in this valley were totally damaged. 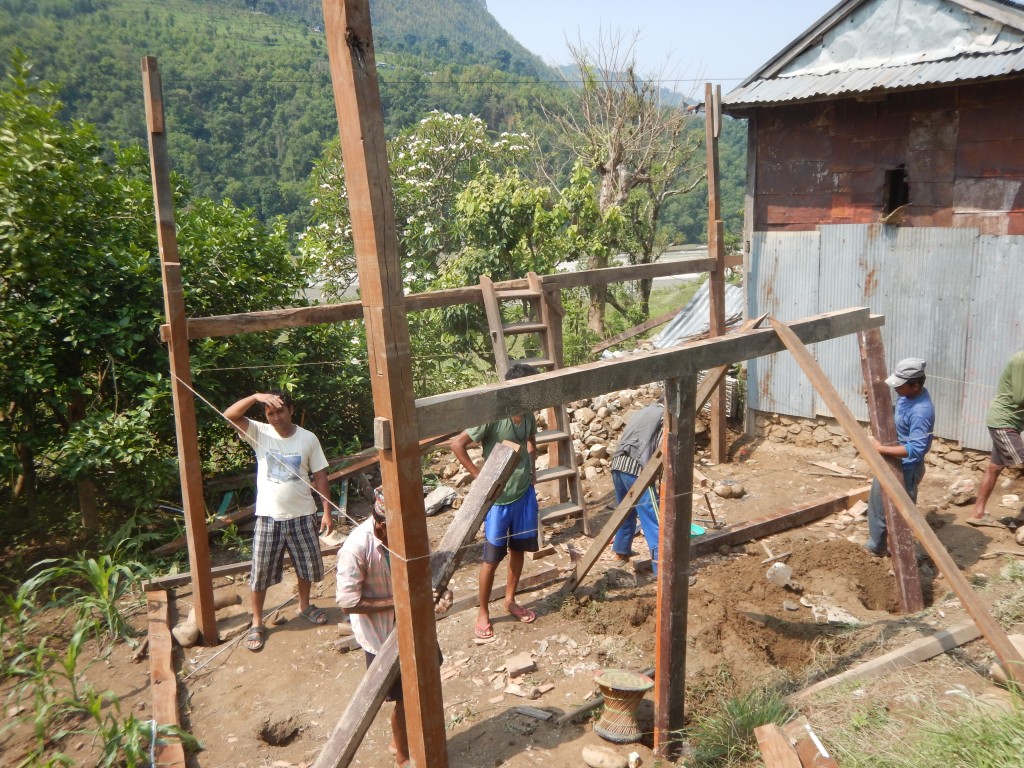 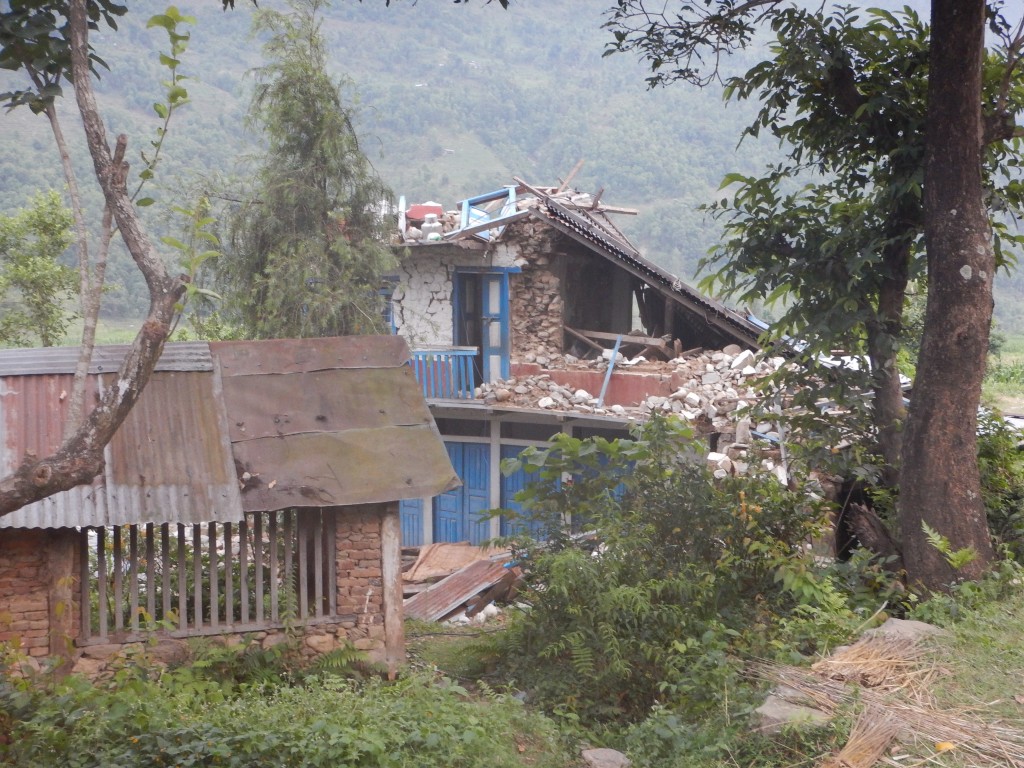 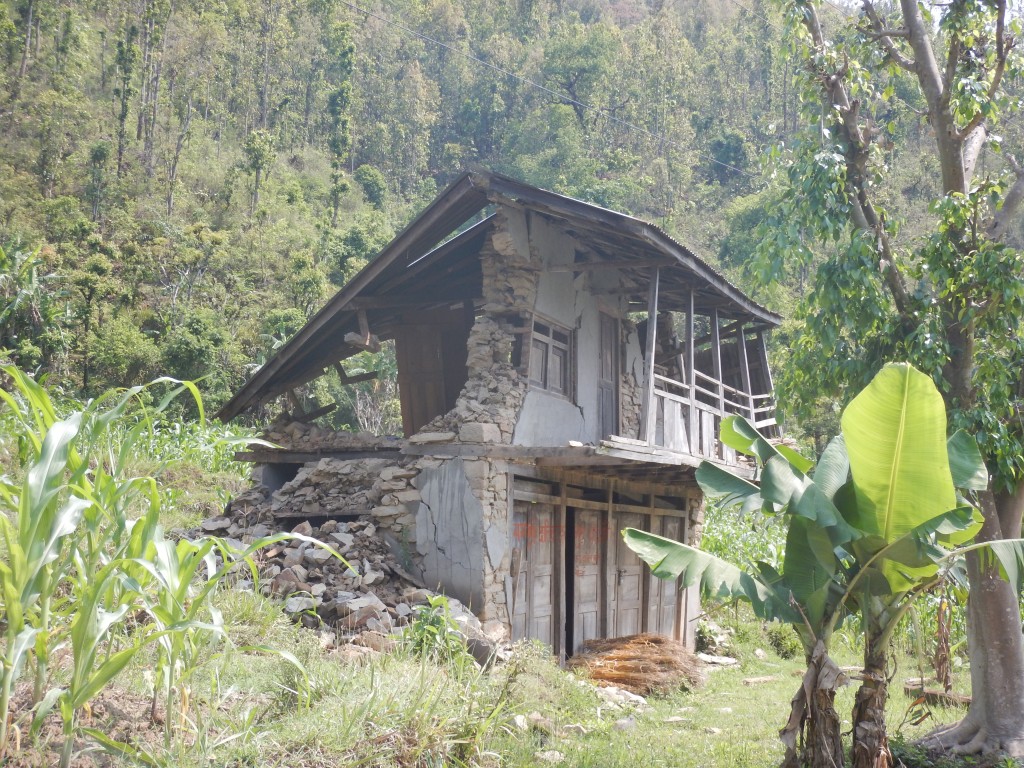 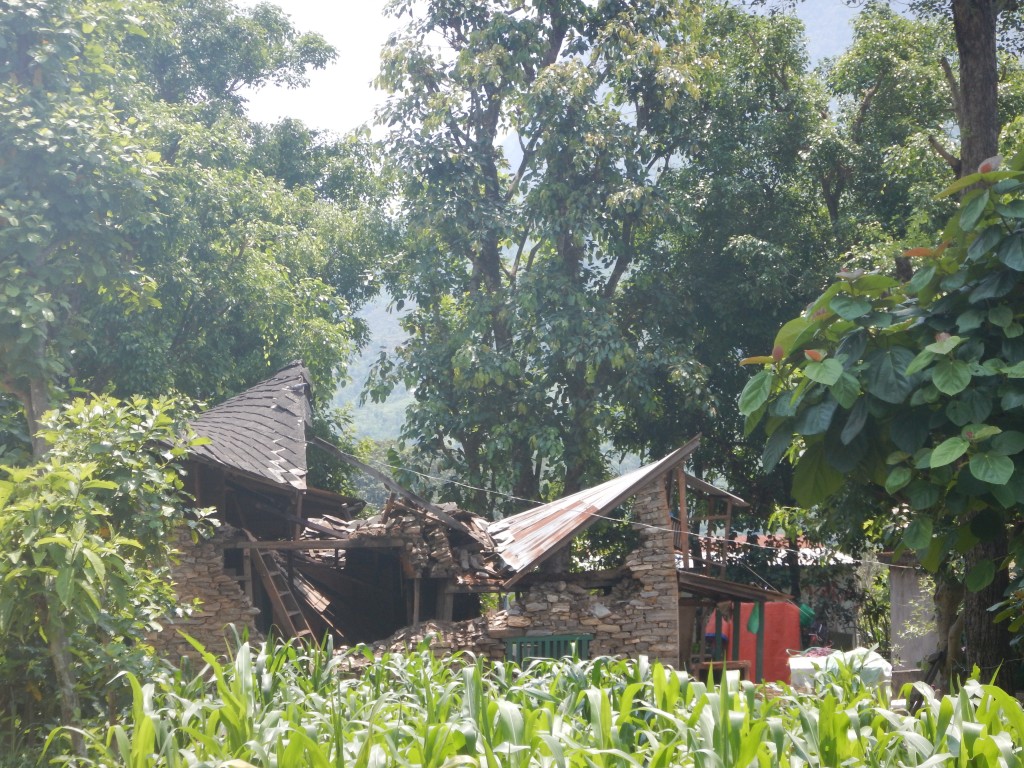 The second school I visited in the search of potential rebuilding projects was Jan Jyet Lower Secondary School. It was situated not far from the village, where I was staying for the night with Ram’s brother and family. Just as the first school, Jan Jyet was also more or less totally damaged. 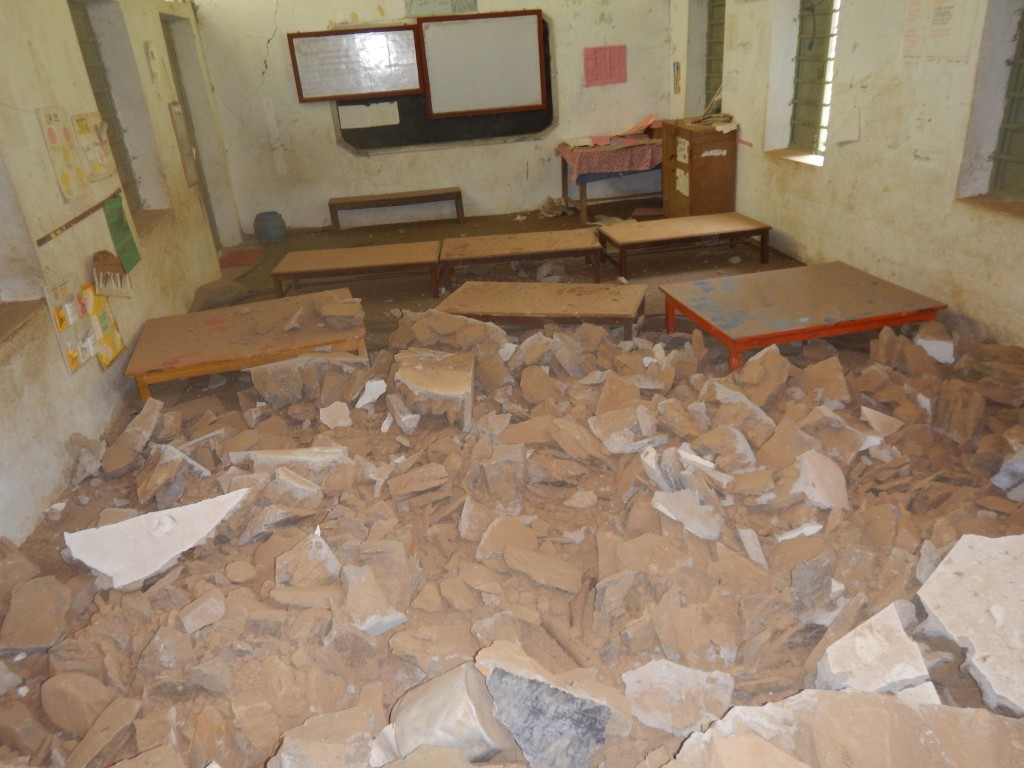 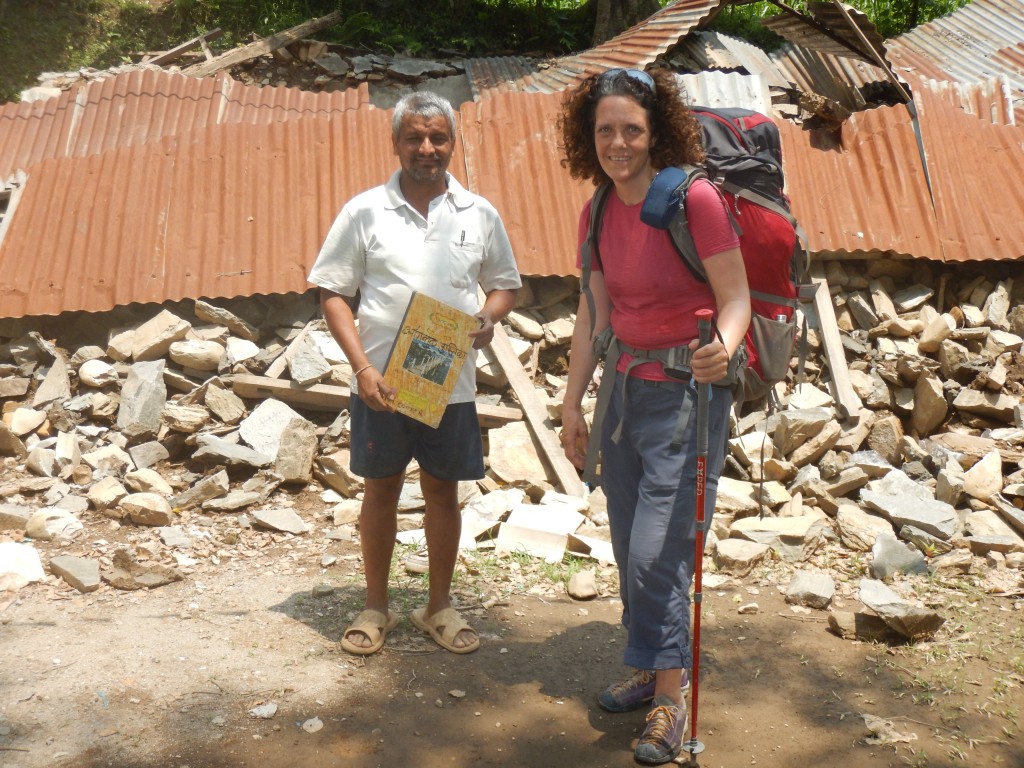 My American friend C.J. also has a friend, Raj, from Dhading, whose family home was totally destroyed in the earthquake. I have met his friend once before and wanted to visit him at his home before I ended my trip in order to see how he was doing. Through C.J. and my friend Babu, we managed to locate Raj’s home and, as it was not too far away from where we were, we went to visit him and his family. 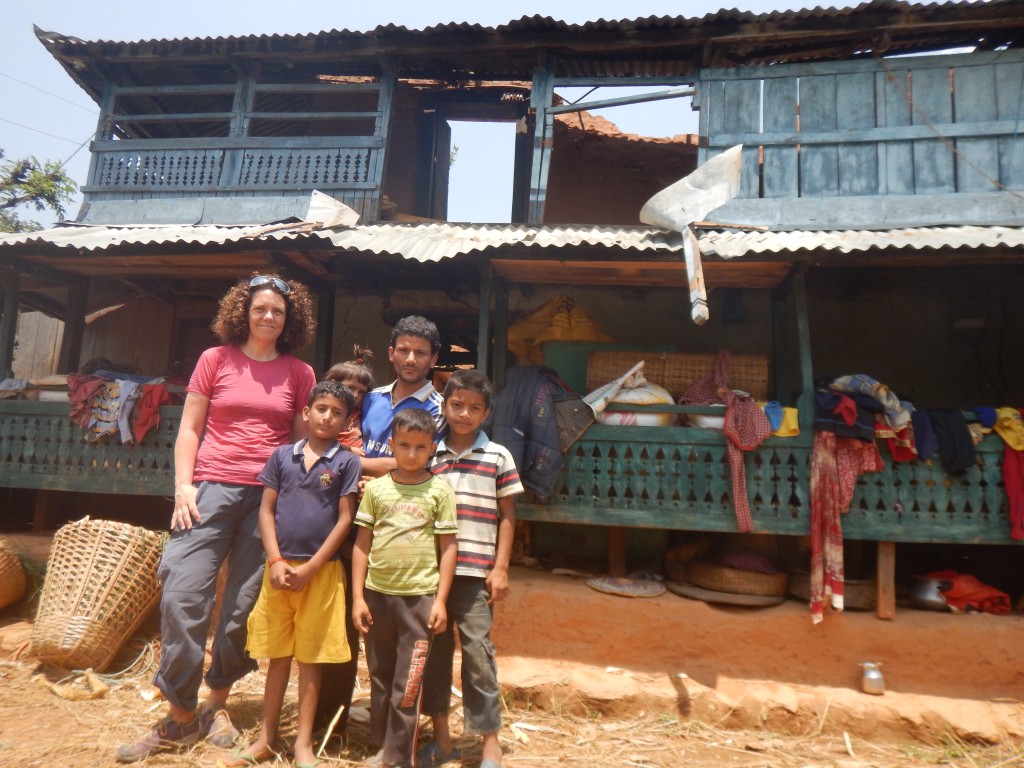 I arrived at Raj’s farm and saw for myself the conditions of his house. His home was very damaged and was impossible live in it. Raj and his brother were working hard to build temporary houses before the monsoon started. In the mean time, the family was living under a tarp. I reflecting on families like Raj’s that will be living in a temporary house for one… two… maybe three years before they can sit by the fireplace in the kitchen of their rebuilt permanent house again. 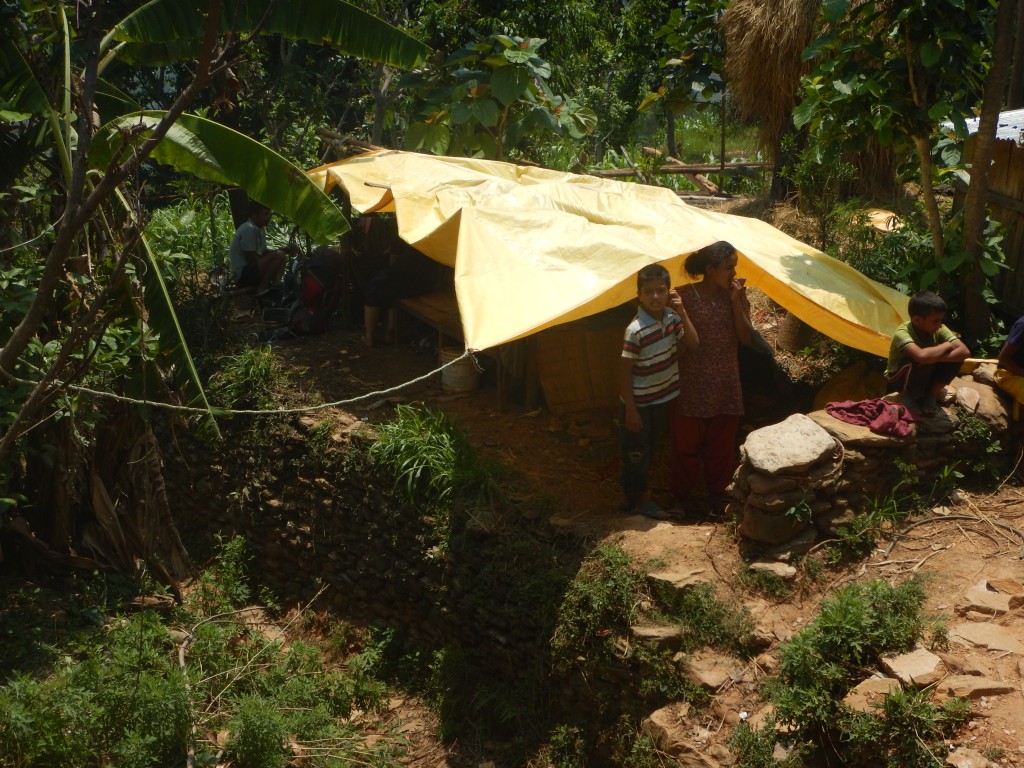 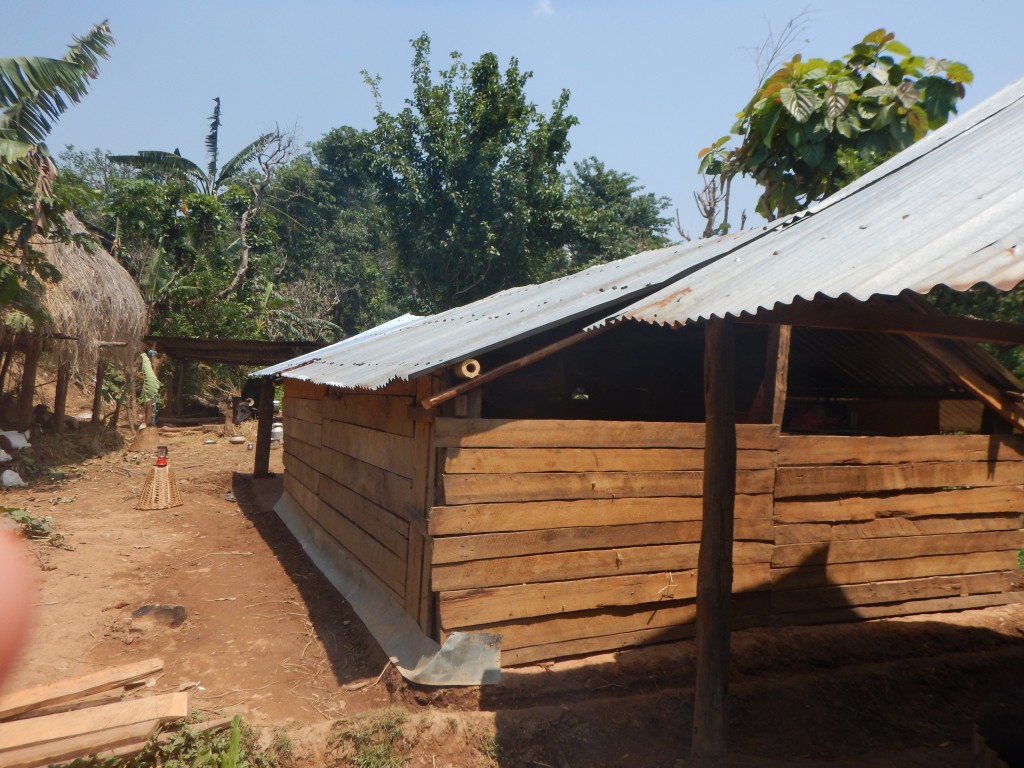 It was a special atmosphere to walk through the small villages, surrounded with rice fields that reached all the way down to the river, flowing from the mountains in Himalaya and through the valley on its way to the sea. Although almost all of the houses were totally damaged after the earthquake, the villages were still full of life. 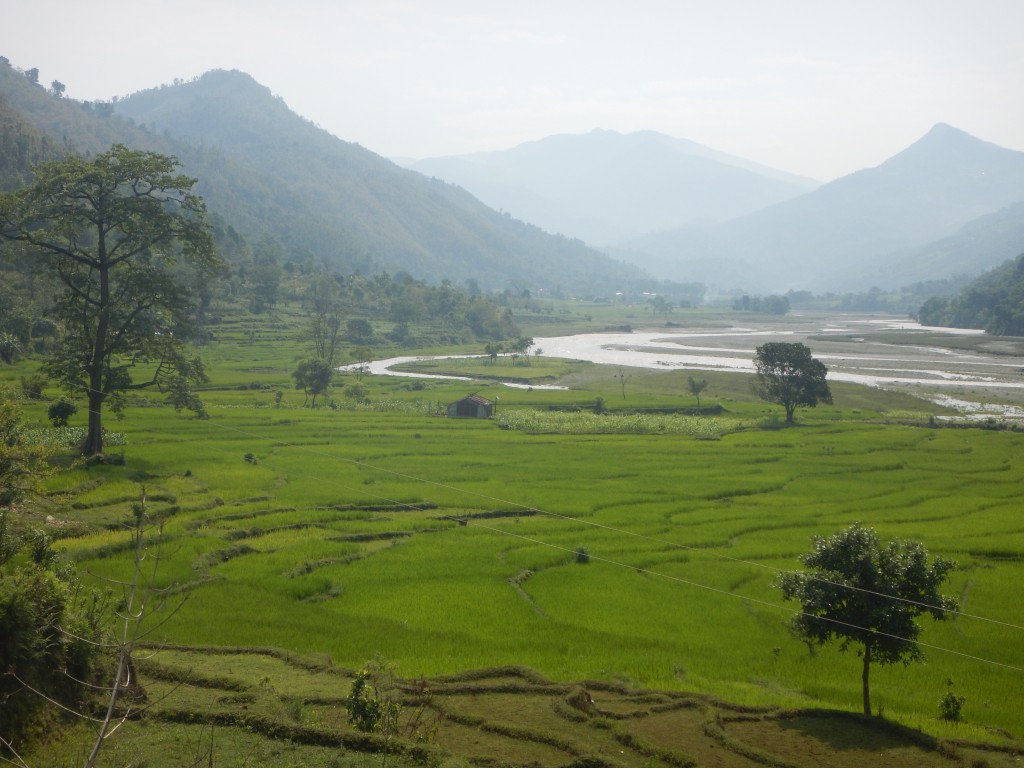 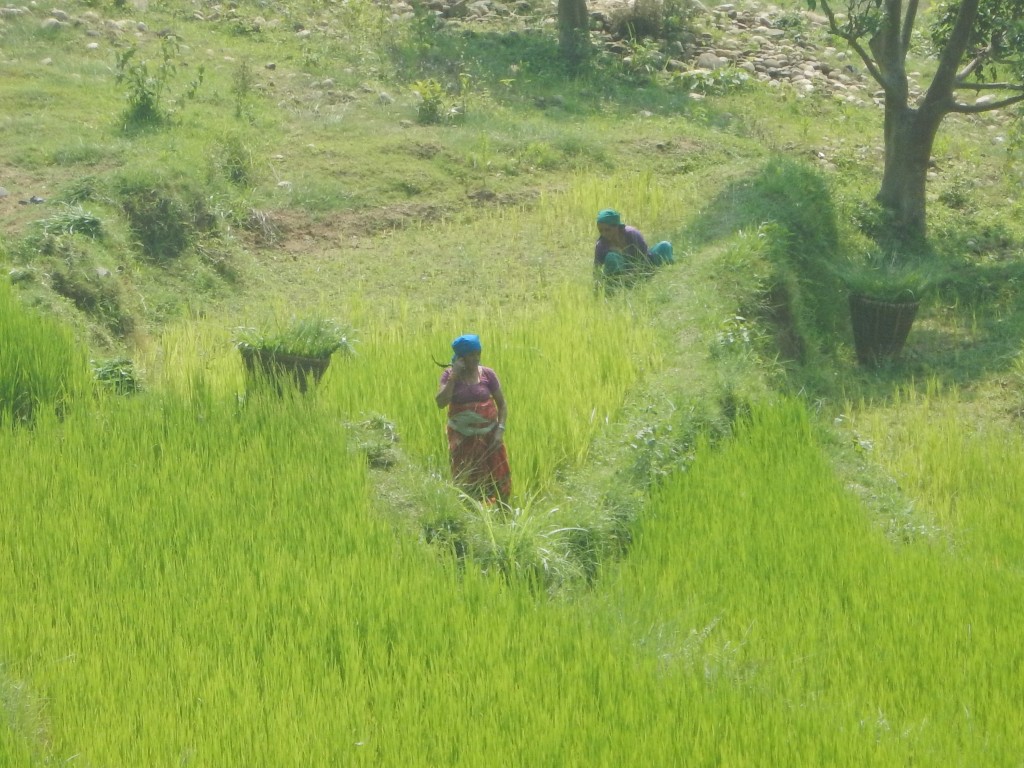 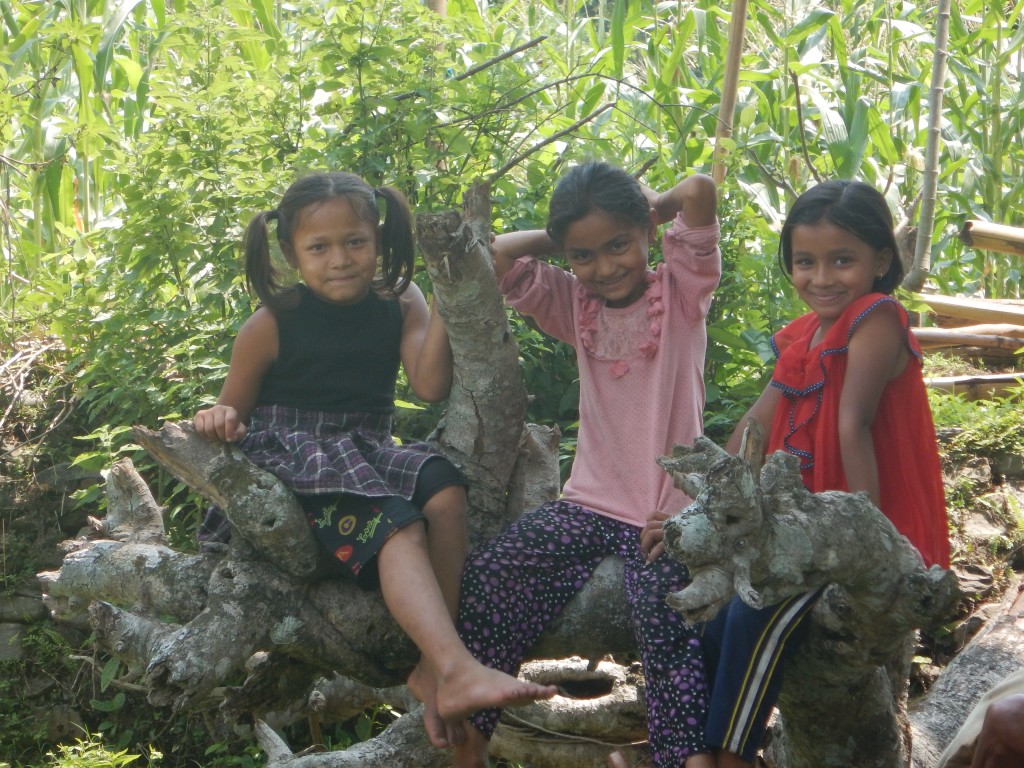 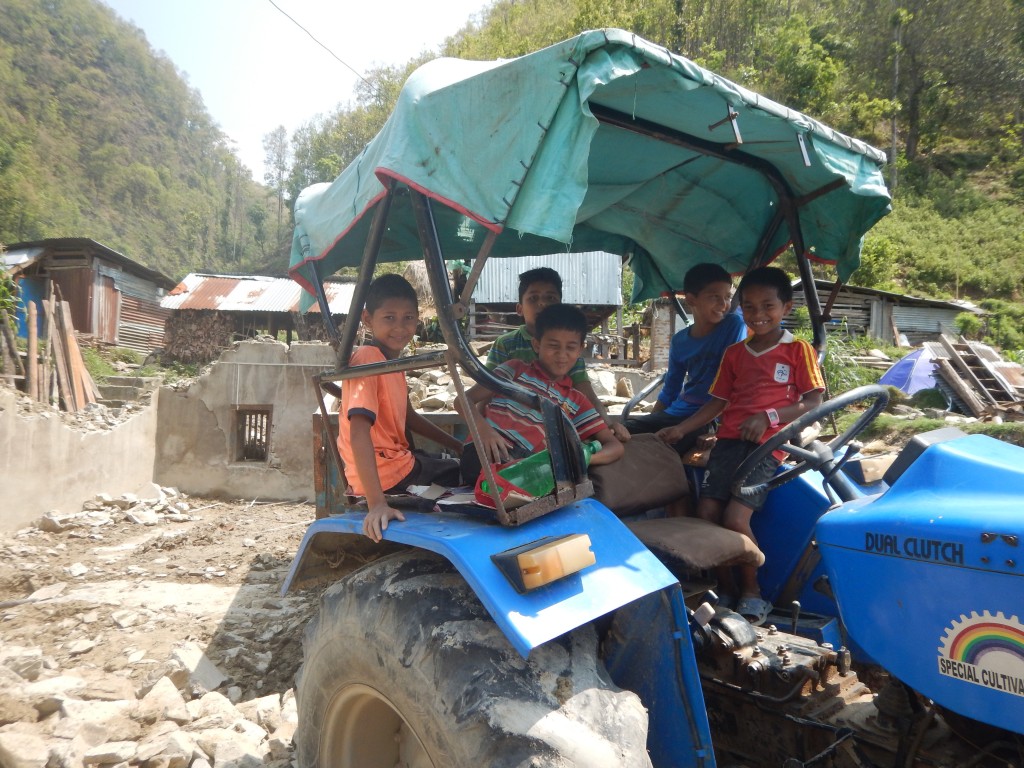 My visit to Dhading was intense. It was a strong experience to see how extensive the damages after the earthquakes were. I saw children smiling and playing. Villagers doing everyday activities like washing their clothes in the river and farming their rice fields. I saw that the villagers preparing for the rainy season, by building temporary houses. Even though the material damages on the houses were enormous, the villagers kept a smile on their face. I asked Babu how it was possible to smile in a situation in which they had lost so much. He answered me, “What we had is gone. Being sad does not bring it back again, it only make the situation worse.”

I admire the Nepalese for their ability to smile their way through difficult situations.

Our friends in Nepal will need a lot of financial support in the years to come in order to rebuild the schools, health stations and homes in the remote villages. We want to be there as a partner with a long-term commitment to help rebuild Nepal. To support our projects you can:

– Participate in one of the non-touristic (rural area) treks, which we are organizing. We donate 1,000 Norwegian Kroner per person to rebuilding projects. (At the moment, these treks are targeted exclusively for Norwegians.